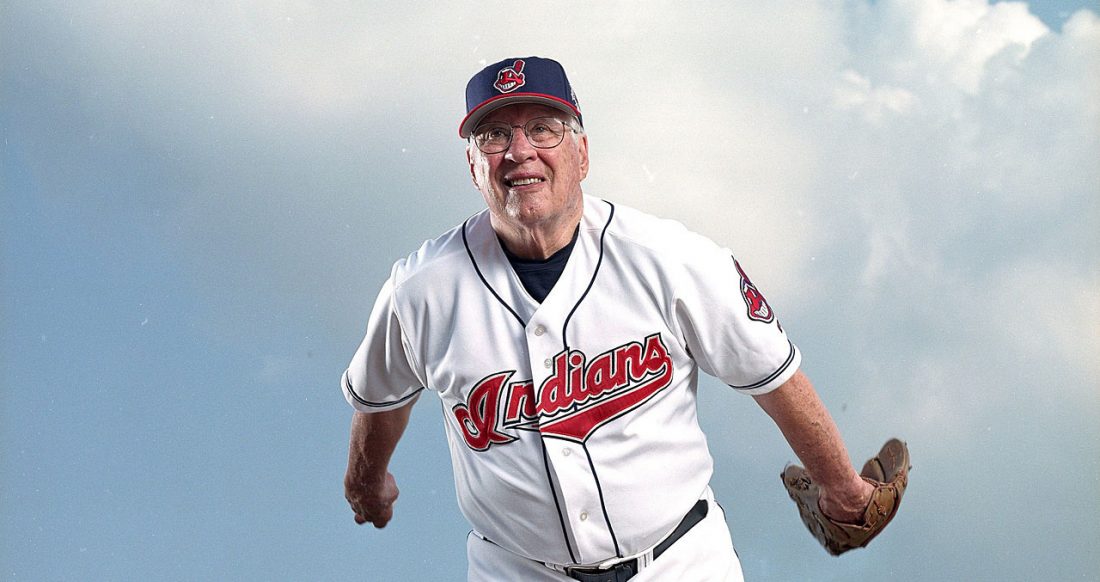 He was born November 3, 1918 as Robert William Andrew Feller in Van Meter, Iowa and his lively fastball would later earn him the nick name ‘The Heater from Van Meter’.

Bob Feller’s rocket like entry into American popularity was unlike any other. The hard throwing pitcher went from working his father’s farm directly to the spotlight of our national pastime, major league baseball. Feller skipped the minor leagues and joined the professional baseball’s American League franchise Cleveland Indians at the age of 17. He pitched from 1936 till 1956. He quickly became a national celebrity who gave 4 of his prime years to military service as Chief Petty Officer in the US Navy from 1941-1945. 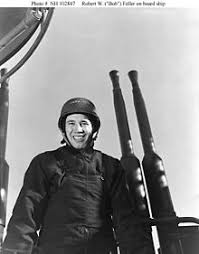 Shortly after the Japanese attacks on Pearl Harbor, Feller became the first professional athlete to volunteer for military service. He requested military combat and was assigned to the USS Alabama.

Bob was a dominant force in major league baseball winning 266 games over his long and illustrious career. He led the American League in wins 6 times and in strikeouts 7 times. He surely would have been a 300 plus game winner had he not lost 4 of his prime years serving in the Navy.

Feller became the first pitcher to win 24 games in a season before the age of 21. He authored 3 no hitters in his career, 1940, 1946 and 1951 and also recorded 12 one-hitters. Rapid Robert let the Indians to a World Series Championship in 1948 when they compiled an American League record 111 wins. In 1948 Feller recorded an astounding 348 league leading strikeouts.

Two of the greatest hitters of all time, Ted ‘Teddy Ballgame’ Williams and Stan ‘The Man’ Musial said of Feller, “he was probably the fastest and best pitcher of our era.”

It may be difficult if not impossible to fathom the popularity that Bob Feller enjoyed in the US as he climbed to the very top of America’s most popular national sport, baseball. Bursting on the major league scene at 17, striking out the very first 3 batters he faced and 15 in total during his first outing, Feller was surely making his mark.

Feller took part in Operation Galvanic in November 1943 and in Operation Flintlock in 1944. He also participated in the Battle of the Phillipine Sea before serving as an instructor at the Great Lakes Naval Training Station.

Bob was awarded 6 campaign ribbons and 8 battle stars for his service missions, Feller was also named an honorary member of the Green Berets. After attending a heroes’ welcome at a luncheon on August 24, 1945 in front of more than 1,000 people Feller proclaimed, “The real heroes didn’t come home.”

Despite being arguably the biggest draw in baseball Feller signed for just $50,000. He was offered twice that amount to play in the Mexican league but declined. 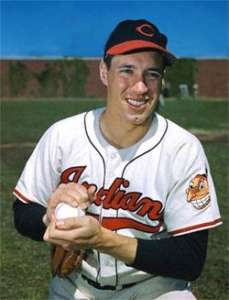 Feller’s opening Day no-hitter has always been a baseball history highlight but Rapid Robert would often point to his no-hitter against the boys in pinstripes at Yankee Stadium on April 30, 1946. He struck out 11 Yankees that day and fondly recalled retiring Tommy Henrich (Old Reliable) Charlie (King Kong) Keller and the Yankee Clipper himself, Joe DiMaggio, in the ninth inning to complete the gem.

In 1947 Feller set up a barnstorming team competing against a Negro League team led by the great Satchel Paige. He continued to appear at baseball card shows signing baseball memorabilia.

Bob Feller stood up for player’s rights and was elected as the very first President of the Major League Baseball Player’s Association in 1956. Bob was married to Virginia Winther and had 3 sons, Martin, Steve and Bruce. After a divorce, his first wife passed away and he later lived with his second wife Anne Feller in Gates Mills outside of Cleveland.

Bob Feller won 266 games over 16 pro seasons. He threw 279 complete games and 44 shutouts. His number 19 has been retired by the Cleveland Indians and he had the distinct honor of being inducted into the National Baseball Hall of Fame on the first ballot in 1962.

The legendary Robert Feller passed of complications from Lukemia on December 15th ,2010 at the age of 92.